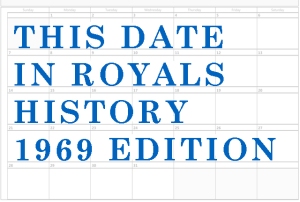 In their first-ever exhibition game, the Royals lost to their expansion cousins, the Montreal Expos, by a 9-8 score in Fort Myers. Kansas City took an 8-6 lead with a four-run eighth inning, only to watch reliever Orlando Pena give up a single, walk, and three-run home run by Bob Bailey in the top of the ninth.

Kansas City hitters collected 16 hits and six walks against four Expos pitchers, but poor relief efforts by Pena and Bill Faul allowed Montreal to win their first-ever preseason game. Faul gave up four runs in the seventh inning, although only two were earned.

Pat Kelly and Billy Harris had three hits each for the Royals, while Joe Keough, Steve Whitaker, Bob Oliver, and Ed Kirkpatrick each picked up two. Meanwhile, Bill Butler and Don O’Riley each pitched three solid innings for Kansas City; each hurler allowed one run and three hits.

The Royals would have one more day of workouts before resuming their exhibition schedule.