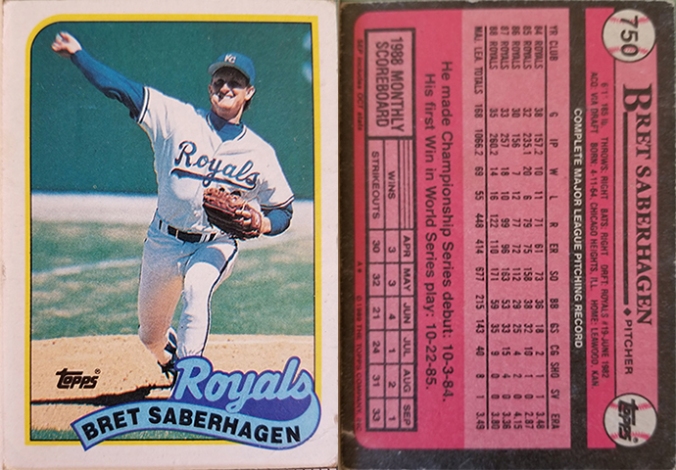 Which season would you pick as the most dominant pitching performance in Royals history? Some might point to Zack Greinke’s 2009 season. Others might suggest picking one of Kevin Appier’s excellent back-to-back seasons in 1992 and 1993. Old-timers might point to Steve Busby in 1974 or Dennis Leonard in 1974. And some would throw out Bret Saberhagen’s Cy Young years in 1985 and 1989.

Bret William Saberhagen was born on April 11, 1964 in Chicago Heights, Illinois. His family moved to California when Bret was still a youngster, so he mostly grew up in the Los Angeles area. In his senior year at Grover Cleveland High School in Reseda, Saberhagen had some tendonitis in his shoulder, which affected his velocity. That caused his draft stock to fall, but the Royals selected him in the 19th round of the 1982 draft. Shortly after that, he proved his shoulder was fine by throwing a no-hitter in the Los Angeles City Championship Game.

Despite his youth, Saberhagen spent little time in the minors. His control was exceptional for a young player, as he walked only 48 batters in a combined 187 innings at Class A Fort Myers and Class AA Jacksonville in 1983. Meanwhile, the major-league team was undergoing a messy 1983 season, with injuries ravaging the pitching staff and then the ugliness of players being arrested on charges related to a federal cocaine investigation. With pitchers like Paul Splittorff and Larry Gura nearing the end of their careers, and Dennis Leonard suffering a knee injury, the Royals were willing almost forced to go with a youth movement.

So Saberhagen started the 1984 season in the majors, despite still being in his teens. After a few relief appearances, he was moved to the rotation and helped the Royals win a surprise division title. Of course, Saberhagen really became a star in 1985, winning his first Cy Young Award and World Series MVP honors as the Royals won their first title.

Ah, the 1989 season. Saberhagen and the Royals had pinpointed his problems in 1988 as a lack of feel for his curveball (Saberhagen had walked a career-high 59 and also allowed a league-high 271 hits). After a spring training full of working on his release point, it didn’t take long for the work to pay off. In his second start of the season, Saberhagen shut out Baltimore on three hits and no walks, while striking out six. However, if you had asked him before the game, Saberhagen would not have predicted such success.

“The way I was throwing the curveball, I think E-Z (bullpen coach Glenn Ezell) needed to put on three pairs of shin guards, a balloon chest protector and a glove on each hand. I was bouncing balls everywhere.”—Saberhagen, quoted by Bob Nightengale, The Sporting News, April 24, 1989

However, his next start was ugly, as Toronto chased Saberhagen from the game with a five-run first inning. That led to an oddity, as Saberhagen was able to pitch in relief the next night and then appeared as a pinch-runner (!) in the Royals’ next game. In that one, catcher Bob Boone singled to lead off the 13th inning in Baltimore. With the Royals out of position players, manager John Wathan turned to Saberhagen. It paid off when Frank White and Brad Wellman followed with singles, and the unlikely pinch-runner scored the game-winner.

“It was kind of fun. I enjoyed running the bases in high school. I ran for (George) Brett one year. I’ll probably pinch-run for Bo (Jackson) next.”—Saberhagen, quoted by the Associated Press, April 18, 1989

That bad start in Toronto was the only time all season Saberhagen would fail to make it through five innings. Most times, he was working at least seven innings. It’s true it was a less-bullpen-dependent era, but Saberhagen was normally pitching that much on merit. He finished April with three strong starts (25 innings, 2.16 ERA, 10 Ks, 3 BB) although he only got one win out of them as the Royals got shut out in one game and staged a late-inning comeback in another. Kansas City finished April with a sterling 16-8 record, although they were still two games behind the surprising Texas Rangers in the AL West.

For the month of May, Saberhagen went 3-2 with a 2.23 ERA in 44 1/3 innings. He easily could have picked up two more wins; for the second time in the season, he was on the wrong end of a 2-0 shutout despite throwing a complete game (in this one, Saberhagen gave up a walkoff two-run home run to Detroit’s Lou Whitaker with two outs in the ninth). His first start of the month was a 3-1 complete game loss in Cleveland. So with any sort of run support, his record could have been 8-1 at the end of May instead of 5-4.

That run support did finally show up in his last two starts of May, which was good, because Saberhagen allowed 10 hits and four runs (three earned) in 6 2/3 innings in Texas on the 24th and pitched only five innings against Minnesota on the 29th before leaving with shoulder soreness.

After an 11-day rest period for his shoulder, Saberhagen resumed dominating the American League. He only made four official starts in June, going 2-0 with a 2.33 ERA. Not included in those numbers is his start on June 26 against Seattle, when he pitched 3 1/3 innings without giving up a hit before the game was rained out. The Royals went 14-12 in June and finished the month with a 44-33 record, which left them still two games out of first, now trailing Oakland.

July was probably Saberhagen’s worst month of the 1989 season. He still won three of his four decisions, but this time with a “lofty” 3.25 ERA in 36 innings. The culprit was back-to-back starts when he allowed four earned runs each, on the 20th against Cleveland and the 26th in Boston.

Interestingly, Saberhagen did not make the All-Star team. His teammate Mark Gubicza did. As of July 6, when the pitchers and reserves were named, Saberhagen had an 8-4 record and 2.52 ERA, while Gubicza was 8-6 with a 2.47 ERA. This is not to argue that Gubicza was unworthy; just an oddity that the eventual Cy Young winner wasn’t an All-Star. Had the Royals provided Saberhagen with some run support earlier in the year, I suspect he would have been the choice.

Anyway, Saberhagen rebounded to have a sensational August. He started seven times; the Royals won all seven games, with Saberhagen picking up the decision in all seven. In 57 innings, he had a 1.58 ERA and held opposing hitters to a meager .207/.225/.310 line. Kansas City had ended July 6.5 games out of first; with their top pitcher on a hot streak, the Royals went 21-8 in August. One of Saberhagen’s key starts in the month came on the 26th, when he shut out the first-place Oakland A’s in a 2-0 four-hitter. That put KC 2.5 games behind Oakland in the AL West race, which is where they ended the month. The Oakland game came five days after he held California, the other team vying for the division title, to two runs in eight innings.

So as September began, the AL West was a three-team race. Had the current wild-card setup existed, all three teams probably would have been playoff locks—they all had better records than the AL East leaders (Toronto and Baltimore). But it was still a two-division setup, so the Royals needed a strong September to return to the postseason.

Saberhagen did his part, with a 6-1 mark in the month and an ERA of 0.98. That’s right, in 55 innings, he allowed six earned runs. Opposing batters hit a laughable .168/.208/.255 against the Royals’ ace. As a result, his final numbers were a 23-6 record with a league-leading 2.16 ERA (and league-best numbers in ERA+, FIP and WHIP, although no one knew what those were at the time). However, the Royals could only manage a 14-14 record for the month, and Oakland won the division by seven games over Kansas City and eight over California. Still, Kansas City’s 92-70 mark was their best since 1980, and it would be the franchise’s best season until the 2015 team won 95 games.

Of course, no one knew that at the time. They did know that Saberhagen was probably going to win the Cy Young Award, as his teammates and manager told The Sporting News:

For his part, Saberhagen admitted to thinking about the award, even as he stressed he was more interested in a division title.

“If you just look at the numbers, I have to feel pretty good about my chances. It’s been on my mind, I have to be honest about it. But it’s really up to the writers.”–Saberhagen, quoted by Steve Cameron, The Sporting News, October 2, 1989

By and large, the writers agreed. Saberhagen received 27 of 28 first-place votes (Oakland’s Dave Stewart got the other). He also finished eighth in the AL MVP vote. By bWAR, he really was the most valuable player in the league; his 9.7 was better than Rickey Henderson, Wade Boggs, Cal Ripken—all of ‘em. And he threw a Gold Glove award on top of it.

Just like no one knew 1989 would be the best Royals season for almost three decades, no one knew it was the high-water mark of Saberhagen’s career. Despite all the pitching wealth the team had, they concentrated on the bullpen in the offseason, signing NL Cy Young winner Mark Davis rather than trying to improve their offense. Davis basically fell off a cliff, Saberhagen suffered through an injury-plagued year (he made just 20 starts and went 5-9), and the first team to have both defending Cy Young winners tumbled to a miserable 75-86 record. And after Saberhagen went 13-9 in 1991 for an 82-80 team (although he did throw a no-hitter on August 26 of that year), he was traded to the Mets in a deal (Kevin McReynolds, Gregg Jefferies, and Keith Miller in return for Saberhagen and Bill Pecota) that shocked Royals fans.

Saberhagen would spend 3 ½ seasons in New York, with a fine 14-4 mark in 1994 after two injury-filled seasons. He was dealt to Colorado at the trade deadline in 1995, and made his return to the postseason with one start in the NL Division Series that fall. However, shortly after the season he underwent arthroscopic surgery to repair a torn ligament in his right shoulder. The rehabilitation from that dragged on, he had another surgery in June, and he missed the entire 1996 season as a result. He returned to the mound in 1997, now with the Boston Red Sox, for six games. And in 1998 and 1999, the old Saberhagen seemed to return: he went 15-8 and 10-6 in those two seasons for Boston, winning the Sporting News Comeback Player of the Year and Tony Conigliaro awards in 1998. At last, a torn rotator cuff injury he suffered late in the 1999 season effectively ended his career. He missed the 2000 season and attempted a comeback in 2001 but pitched in only three games before retiring at the end of the season.

Saberhagen was deservedly inducted into the Royals’ Hall of Fame in 2005. He has devoted his retirement to running his Make A Difference foundation and other charitable pursuits. And he still shows up at various Royals Alumni functions. If you were selecting an all-time Royals team, it would not be complete without Bret Saberhagen.

About the card:
I love this card. I loved it when I pulled it from a pack in 1989 and I love it now. The blue and green are sharp, and I was always partial to the 1989 Topps design. (So much so that I started signing my name with that little flourish you see under the “Royals” on their jerseys. Yes: What. A. Nerd.) Throw in a nice action shot that makes you feel a little bit like you’re in the batter’s box and this is, to me, a gorgeous card. Now that I’m a middle-aged man, I notice that Saberhagen appears to be warming up in someone’s backyard—that grass needs help. From that, I assume it’s a spring training shot.