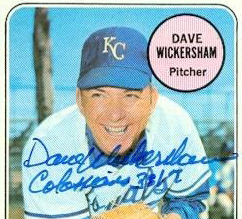 The Royals had a day off, heading back to Kansas City for a 10-game homestand against Boston, New York, and Washington.

Continuing our series on some of the lesser-known players on the 1969 Royals, let’s look at pitcher Dave Wickersham:

David Clifford Wickersham was born on September 27, 1935, in Erie, Pa. He was only partially done with his college career at Ohio University when the Pirates signed him as an amateur free agent. He was still in the minors when the Kansas City A’s selected him in the 1959 minor league draft. A solid season at Class AA Shreveport in 1960 earned him a September callup for his major-league debut. After bouncing back and forth between KC and Shreveport in 1961, he was in the bigs for good starting with the 1962 season.

Pitching mostly in relief, Wickersham enjoyed a solid season (11-4, a 4.17 ERA that was at 3.67 before a disastrous start in his penultimate appearance for the year) despite suffering from a pulled muscle and some back issues. Despite that last start, his stint in the rotation went well, so Wickersham was almost exclusively a starter in 1963, tying for the team lead with 12 wins. The A’s, in flux as always, traded Wickersham and two players to Detroit for Rocky Colavito, another player, and $50,000.

Despite Detroit manager Charlie Dressen spending the winter talking about using Wickersham in relief, the hurler enjoyed his finest year in 1964 as a mainstay in the Tigers’ rotation. He went 19-12 with a 3.44 ERA. A feature in The Sporting News that June gave partial credit to Wickersham’s new bride, Carol Sue, who kept a record of every pitch he threw. This contributed to Wickersham’s “book” on opposing hitters, which he felt he had to pay close attention to in order to overcome a lack of outstanding velocity.

Wickersham missed out on his chance to win 20 games in somewhat bizarre fashion. In his last start of 1964, against the Yankees in New York, was ejected in the seventh inning with the Yankees ahead 2-1. On the play in question, New York’s Phil Linz beat out a bunt single which scored the go-ahead run. As first baseman Norm Cash argued with umpire Bill Valentine, Wickersham tried to call timeout several times, hoping to keep the runners from advancing. Finally, he tapped Valentine on the shoulder. The umpire turned around and immediately kicked Wickersham out of the game. The pitcher, who was a devout Baptist and active member of Fellowship of Christian Athletes, was stunned, as were his teammates.

“I’ve never been kicked out of anything. I asked the umpire four times to call time. He didn’t hear me. Finally I put my hand on his shoulder. I know you can’t push an umpire, but I wasn’t pushing.”—Wickersham, quoted by The Sporting News, October 17, 1964

The Tigers scored two runs in the ninth and won, so it’s entirely possible Wickersham could have been a 20-game winner. The story has a happy ending, though. Forty years later, Wickersham wrote to Valentine and told him he should not feel badly about the ejection. Valentine, by then general manager of the Class AA Arkansas Travelers, had spent years telling people he had acted too impulsively. But Wickersham wrote, “You had called the play correctly as I saw it. I hope you’ve had a good life and are in good health. You were certainly a good umpire.”

Anyway, Wickersham had a less successful season in 1965 in terms of wins and losses, with a 9-14 record, even though his ERA was a respectable 3.78. After winning his first start, he lost eight decisions in a row, with his teammates scoring a combined 13 runs in those games.

Wickersham was a Tiger for two more seasons, pitching mostly in relief with some success. His combined marks for 1966 and 1967: 12-8 with 6 saves and a 3.03 ERA in 226 innings. After the 1967 season, he was traded to Pittsburgh. He spent one season with the Pirates, mostly at Class AAA Columbus.

The Royals purchased Wickersham from the Pirates in October 1968. The pitcher was working on his family’s apple farm in Pennsylvania and contemplating retirement when he found out about the transaction. Although he was on the minor-league roster when spring training started, Wickersham, who still had a home in the KC area, was happy to be a Royal.

“They’re doing a great job in this organization. This is a first-class operation. It reminds me a lot of the Detroit organization. I’m really impressed…I couldn’t be happier being in the Kansas City organization.”—Wickersham, quoted by Joe McGuff, The Sporting News, March 8, 1969

Wickersham had a good spring training and made the team. Unlike many of the players, he was a veteran. The Royals had a young rotation but a pair of 33-year-olds anchoring the bullpen in Wickersham and Moe Drabowsky. Wickersham pitched five scoreless innings in relief in KC’s first-ever game as the Royals beat Minnesota in 12 innings. He had a decent season (2-3, 3.96 ERA in 50 innings) but was demoted to Class AAA Omaha in late July. The Royals traded him to Atlanta after the season, and when he learned the Braves would send him to the minors during spring training, Wickersham decided it was time to retire.

Although he was a Royal for only one season, Dave Wickersham currently holds two places of honor in Royals trivia. Along with Drabowsky, Aurelio Monteagudo, and Ken Sanders, he is one of four players to play for both the Kansas City A’s and Royals. And, at age 83, he is currently the oldest living former Royal. He still lives in the Kansas City area, and his daughter Carey is a reporter for WDAF-TV. You can see an interview she did with him a few years ago here.