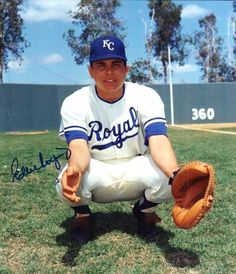 The Royals enjoyed an off-day as they traveled home from New York for a scheduled seven-game homestand with Detroit and Oakland.

Continuing our look at some of the lesser-known 1969 Royals, today we focus on catcher Ellie Rodriguez, who became the first All-Star in team history during Kansas City’s inaugural season.

Eliseo Rodriguez was born on May 24, 1946, in Fajardo, Puerto Rico. I thought he might qualify as the first Puerto Rican player in Royals history, but the 1969 team actually had three: infielders Luis Alcaraz and Jackie Hernandez were also from the island. And since Hernandez and Rodriguez were both on the field for the first pitch in Royals history, I guess they technically tied for the honor.

Anyway, Rodriguez was signed by the Kansas City Athletics as an amateur free agent in 1964. He was not signed out of Puerto Rico; his family had moved to New York in 1953. However, under the rules at the time, MLB teams could draft players from other teams if they had just completed their first year in professional baseball. The Yankees used this rule to pick Rodriguez, who had hit .354/.444/.541 in rookie ball. Rodriguez progressed quickly through the Yankees’ system, despite not living up to the offense that first year promised. However, he hit .291/.396/.370 at Class AAA Syracuse in 1968 and made his major league debut that May. Since he and his family had lived just blocks from Yankee Stadium, it was a huge day for the Rodriguez family

But the Yankees left him unprotected in the expansion draft, and the Royals used the 13th pick to take the catcher, the first backstop chosen by the team. He beat out several other candidates for the starting job. Rodriguez started the season slowly, but hit .294 in May and .281 in June. Overall, as July began, he was batting .262/.348/.359, pretty good for a catcher in 1969. So it’s not surprising he made the All-Star team as a reserve, the Royals’ only representative. Unfortunately, he did not appear in the game (of the four expansion team’s representatives, only Seattle’s Don Mincher got to play—kind of rude, if you ask me).

Rodriguez slumped quite a bit in the second half of the season, ending up with a final line of .236/.333/.296. Not surprisingly, the Royals were looking for a little more offense from the catcher position, even though Rodriguez was considered a top defensive catcher (he threw out 45% of the runners who tried to steal on him in 1969, against a league average of 36%). Rodriguez backed up Ed Kirkpatrick most of the year, then was traded to Milwaukee for Carl Taylor.

After hitting a miserable .210/.311/.257 in 1971, Rodriguez rebounded to bat .285/.382/.352 in 1972, making the All-Star team again. Sadly, he didn’t get to play in this game either. Rodriguez played one more year for the Brewers, then was traded to the California Angels. Here, he enjoyed a few more career highlights, including tying an American League record for putouts in a nine-inning game (19) and setting one for most putouts in an extra-inning game (21), He also caught Nolan Ryan’s fourth no-hitter.

Rodriguez spent the 1976 season with the Dodgers, then played in Mexico for a few years. After playing, he went into coaching and managing. Eventually, when the Atlantic League began play in 1998, Rodriguez served as a player development consultant, scouting players in Latin America. He currently coaches at the Roosevelt Baseball School in San Juan, Puerto Rico.