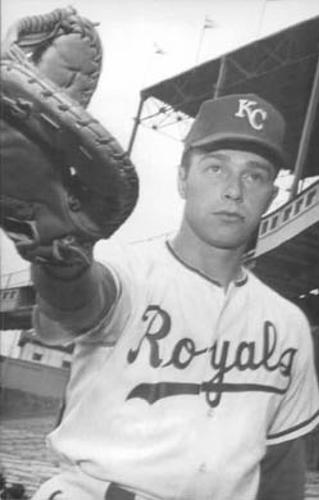 The Royals had a day off as they traveled to the East Coast for a nine-game trip.

Our series of short biographies on some lesser-known members of the 1969 Royals continues with a look at first baseman Mike Fiore.

Michael Gary Joseph Fiore was born on October 11, 1944, in Brooklyn. His exploits on the diamond were quickly noticed in the New York area in high school, and the Mets signed him as an amateur free agent before the 1963 season. Under the rules at the time, teams could draft players from other organizations if they had been in the minors for a year (future Royals teammates Ellie Rodriguez and Lou Piniella also changed organizations through this method). Baltimore plucked Fiore from the Mets’ system and assigned him to Class A Aberdeen (South Dakota) for 1964.

Fiore responded well, hitting 23 home runs, compared to seven the year before. After another fine season in Class A (this time at Pasco, Washington), he was moved up to Class AA for 1966. He tore the cover off the ball, hitting .308/.513/.579 in 45 games. That got him promoted to Class AAA Rochester, where he struggled for the first time as a professional (.244/.351/.415). On top of that, his season was shortened by a broken right wrist sustained when he tried a diving catch in the outfield.

Fiore then lost almost a full season, as he had a six-month stint in the Army, serving at Fort Bragg, North Carolina. He returned to baseball in time to get in 19 games, and played in the Florida Instructional League over the winter, but 1967 was a bit of a lost year.

However, starting at Rochester again in 1968, Fiore made up for lost time, hitting .271/.390/.489 with 19 home runs. He was called up to the majors in September, making his debut on September 21. But the Orioles were a powerhouse, and Boog Powell was firmly entrenched at first base, while the outfield spots were spoken for by Frank Robinson, Paul Blair, and Don Buford.

It was perhaps a relief to Fiore when he was selected in the expansion draft by the Royals with the 17th overall pick. Although he was leaving what was a perennial contender at the time, he would have a chance to play regularly in Kansas City.

But when manager Joe Gordon retired after the season and the Royals appointed Charlie Metro to the position, Fiore’s career took a turn for the worse. Metro was something of a dictator; very few players liked him or his methods. Metro seemed to have a special dislike for Fiore, and soon Bob Oliver was playing first base regularly while Fiore rode the bench. He was traded to Boston on May 28, 1970, for infielder Tommy Matchick.

Although Fiore was with the Red Sox for the rest of 1970 and all of 1971, he was a bench player, appearing in 92 games over the two seasons. In spring training 1972, he was traded to St. Louis. He wouldn’t be a Cardinal long; in June he was dealt to San Diego. However, on July 3 he was sent back to St. Louis.

Of course, Fiore didn’t know it then, but he had played his last major league game. He would play in the minors several more years, hanging up the spikes when he was released by Pittsburgh in 1978.

After baseball, Fiore went to work for the Mineola (New York) school district, where his wife Camille was a teacher. Today, he splits his time between Mineola and homes in Pennsylvania and Florida.