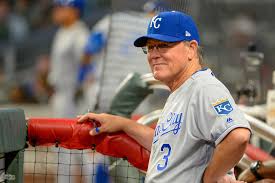 When Opening Day of the 2020 season rolls around, the Royals’ lineup card will be set by someone not named Ned Yost for the first time since May 13, 2010. Just consider for a second the likelihood of a team having the same manager for a decade (essentially). By my count (with the help of Baseball Reference), 93 men have managed at least one game since the start of the 2010 season, meaning the other 29 franchises have, on average, used three managers each since Yost took over (this does include interim managers, but still). As you probably know, Yost managed the most games in Royals history (1,585), but you may not realize that he managed more games than the next two men on the list combined (1,484).

Of course, the next two men on that list are Whitey Herzog and Dick Howser. I think most people would consider them the top two managers in team history. But…you most likely know that Yost passed them in wins and losses a while back:

The numbers have it. Yost is the winningest manager in Royals history, so he must be the best. Right?

But wait. Can the losingest manager in team history be the best manager? Surely not. Right?

Obviously, there’s a lot of subjectivity here. Advanced stats have done lots of great things to enhance our understanding of baseball, but there’s no magic formula to show the effects of managers on their teams, and indications are that lineup construction makes little difference from game to game. Even the decisions a manager makes to impact a game, things like pitching changes and pinch-hitters, are ultimately up to the players involved to make them work.

Therefore, it’s a bit of straw-grasping to try and quantify this discussion. One method might be checking the Pythagorean record of the Royals for each manager’s tenure. For the uninitiated, the Pythagorean record estimates a team’s record based on runs scored and runs allowed. Usually a team’s actual record will be within a couple of games either way of their Pythagorean record. Certainly, there are many factors which can affect the difference, but managerial skill would definitely be one.

Herzog was hired a little past the halfway point of the 1975 season. The Royals went 41-26 after he was hired, but with a Pythagorean record of 39-24, so that’s a +2. From there, it was a -2, +4, -1, and +1. Basically, the Royals under Herzog were exactly where they should have been, record-wise. He definitely deserves credit for unlocking that group’s ability. It has nothing to do with this discussion, but just for fun I checked Herzog’s record with St. Louis, and every year except one the Cardinals exceeded their Pythag mark, although never by more than four games. The one year they didn’t (1986) they did exactly what the formula said they should. I would submit that a manager whose team exceeds their Pythagorean record on an annual basis is a good one, so I’m by no means disparaging Herzog.

Howser was also hired midseason, during the second half of the strike-interrupted 1981 season. Succeeding Jim Frey (who might make the list of worst managers in Royals history despite being in charge when KC reached the World Series that had eluded Herzog), Howser was in the dugout for a 20-13 run to close the season. That’s a good record, but the Royals earned it, based on their runs scored and allowed—their expected record was 20-13. The Royals were a +2 in Pythag in 1982, but then started a three-year run of either good fortune or good managing (or both, yes): +5, +4, and +5. Those last two, of course, were the 1984 AL West winners and 1985 World Series champions; the Royals won the division by a combined four games in those seasons. With a lesser manager, maybe they never even reach the playoffs. Anyway, the Royals had a -1 in the games Howser managed in 1986 before being diagnosed with the brain tumor that ultimately took his life. If you were wondering, Howser’s 1980 Yankees were a +6, so here is another manager whose teams were consistently more successful than the underlying numbers might suggest.

And finally, Yost was yet another midseason hire, taking over for Trey Hillman in 2010. The Royals went 55-72 the rest of that season, which was actually three games better than their Pythagorean record. However, in 2011, the Royals were a staggering -7.  After a -2 and a -1, something changed. The Royals were +5 in 2014 and again in 2015, then +4 and +8. Yost finished his managerial career with a 0 and a -5 this year. Just like Herzog and Howser, Yost had previously managed: starting in 2003, Milwaukee was +2, -1, -3, +4, 0, and +3. Yes, that last one is the season where Yost was unceremoniously fired with 12 games left despite the Brewers closing in on a playoff berth.

To sum up, for their Royals careers, Herzog totalled +4, Howser +15, and Yost +10. Considering the respective lengths of their tenures, Howser seems to run away with the prize on this metric.

I do find it interesting that I would consider Howser and Yost to be more of the “personality” type of manager, with Herzog more of the “tactician” style. It’s not that Howser and Yost were incapable of strategizing, and not that Herzog didn’t create a good clubhouse environment—as successful managers, they had to be good at both. But I feel like those were their primary strengths.

And it is fitting that the two men who can claim World Series titles with the Royals rank first and second in that measurement. I am not blaming Herzog for not winning one, but maybe something about Howser’s and Yost’s approaches helped their teams. After all, both faced long odds in at least one point in their title runs—the 1985 Royals were down three games to one in the ALCS and the World Series, and three outs from losing the Series in Game Six, and the 2015 Royals were down four runs and six outs away from losing the ALDS. And (again, not to disparage Herzog) it is interesting that in that 1985 Series, Herzog’s team couldn’t overcome a bad break, or let it go and concentrate on Game Seven. Herzog himself was ejected from Game Seven for complaining about the bad call the night before; if you believe a team reflects its manager’s mindset, the Cardinals weren’t ready to play the biggest game of the year.

There is no right or wrong answer here. Yost will join the other two in the Royals’ Hall of Fame someday, and deservedly so. I do believe an argument could be made for each one, but I personally would rank them Howser-Herzog-Yost. I would give Howser credit for the career he could have had if he had lived longer. As mentioned, I give Herzog credit for bringing out the quality that was in those late 1970s Royals squads; managers before him had failed at that. And while Yost helped end a 30-year stretch of futility, he didn’t come in and immediately improve the team’s fortunes. But the bottom line is that the Royals have been lucky to have all three.

One thought on “Ned Yost: Best Manager In Royals History?”