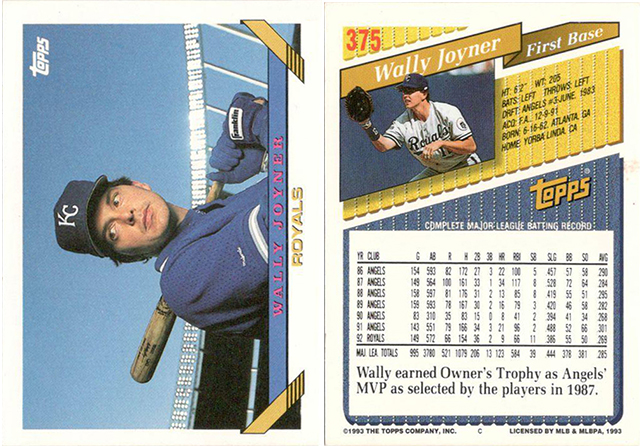 Through the years, it seems like the Royals have had more than their share of first basemen who can hit for a good average but aren’t the typical power hitter you expect to see at that position. Sure, John Mayberry and Steve Balboni were power threats with less than sterling averages, but random players like Todd Benzinger, Gerald Perry, and Doug Mientkiewicz feel like the rule, not the exception. Even in 2015, Eric Hosmer hit .297 with 18 home runs, which is a fine season but not the traditional slugging first baseman (Hosmer would hit 25 homers each of the next two seasons). There’s nothing inherently wrong with this, because you can certainly find valuable players with that skill set. Such as Hosmer, or Wally Joyner.

Wallace Keith Joyner was born on June 16, 1962, in Atlanta. Childhood wasn’t always easy for Joyner from a health perspective; he was born with orange skin due to a hemolytic disease (essentially, and please excuse a layman’s interpretation, antibodies from his mother attacked his red blood cells). As a result, Joyner had two blood transfusions in the first 24 hours after he was born. Later, at age 9, a kidney disease caused a backup of fluids and bacteria, and Joyner gained 15 pounds overnight. Doctors later told his family that waiting a day longer to seek treatment could have resulted in heart failure.

These problems didn’t stop Joyner from becoming a star at Redan High School in Stone Mountain, Georgia. He was named Georgia’s player of the year in 1980, his senior year, excelling on the mound and at the plate. For Joyner, a devout Mormon, Brigham Young University was a natural choice for college. Oddly, Joyner committed to BYU without meeting Cougars’ coach Gary Pullins, which led to a humorous moment when the Joyner family drove across the country to deliver Wally to college. Pullins sized up the arrivals when they called out to him, then began shaking hands with the strapping young man he figured was his new recruit. Nope, it was Wally’s older brother. Pullins had to keep himself together when he realized who his new player was; as he recalled later, “The thing to understand here is Wally coming out of high school had a pear-shaped body and was already losing his hair. He looked like anything but an athlete. The story changed when we put a bat in his hand.”¹

Joyner starred at BYU, and in his junior year the Cougars entered the NCAA tournament with the nation’s #1 ranking. But the loaded team, with future major leaguers Rick Aguilera, Cory Snyder, and a few others, lost early in the tournament. The California Angels selected Joyner with their third-round pick (67th overall) in the 1983 draft.

Joyner sailed through the Angels’ system, impressing the front office enough that they let future Hall of Famer Rod Carew leave as a free agent after the 1985 season, clearing the first base job for Joyner even though the Angels had every reason to expect to contend in 1986 after they finished one game behind Kansas City in the AL West.

The rookie didn’t disappoint, hitting .290/.348/.457 with 22 home runs as the Angels won the division and came within one strike of making the World Series, instead losing a classic ALCS to Boston. Along the way, he became a fan favorite; in the shadow of Disneyland, Angels fans began referring to Anaheim Stadium as Wally World, in a nod to the movie National Lampoon’s Vacation. In the 1986 ALCS, Joyner had five hits in 13 at-bats over the first three games, but missed the last four games with a staph infection that ultimately required hospitalization. Still, Joyner finished second in the Rookie of the Year voting to Jose Canseco despite an OPS 30 points higher. At least he had an All-Star berth and top-10 finish in the MVP vote to console him.

Following a knee injury that cost him half of the 1990 season, Joyner rebounded with a fine .301/.360/.488 line in 1991. As a free agent, he hoped to stay in California. Angels owner Gene Autry had a close relationship with his first baseman. It seemed like a no-brainer, except Jackie Autry, Gene’s wife and the Angels’ chief financial officer, was not a fan. Oddly, the Angels’ front office and Joyner had feuded for years, dating back to that 1986 ALCS. Jackie Autry had rejected a long-term deal that Joyner and his agent had negotiated with the Angels. And despite California offering him four years and $15.7 million, he decided he’d had enough. On December 9, 1991, he accepted a one year contract worth $4.2 million with the Royals. At the time, a player could declare for free agency once every five years, but the Royals were willing to waive that rule to sign their new first baseman.

In an emotional press conference, Joyner said of the deal, “It appeased the moment. It solved problems right now. It also gives the Royals and myself a window to see if it’ll work out and, in my opinion, it will work out. I have a great desire to play for them.”²

After two subpar seasons, the Royals were a rebuilt team for the 1992 season. It took a while for all the parts to fit together. Following a 1-16 start, the team went 71-74, but that brutal beginning kept them in fifth place. Joyner was one of the few bright spots in the early going, hitting .324 as late as May 31, but slumped badly (perhaps due to a rib injury in late May) and finished at .269/.336//386. However, in late June, he reached an agreement with the Royals, extending his contract for three years and $13.8 million, plus a team option for the 1996 season.

Both held steady through June. The Royals ended the month just 1.5 games out of first despite a 38-38 record. After a seven-game hitting streak early in the month, Joyner ended June with a .290/.383/.435 mark.

Joyner was a big help as the Royals struggled to stay in the race in July. The team went 16-12 but lost ground, finishing the month four games behind Chicago in the division. But Joyner batted a sizzling .376/.443/.710 for the month.

Perhaps predictably, he couldn’t stay that hot. He hit .243/.295/.351 for August, his worst month of the season. Although the Royals went 15-14 for the month, and moved to within two games of first on August 19th, they ended the month six games out and in third place, needing a small miracle to win the division.

They didn’t get it, posting another 15-14 over September and three October games. Joyner struggled to a .208/.367/.417 line in just 30 plate appearances as he battled back problems. His last appearance came on September 15. Joyner finished the year with a solid .292/.375/.467 line, much closer to what the Royals expected.

During that 1995 season, Joyner instructed his agent to approach the Royals with some choices for his 1996 contract option, which automatically kicked in when he reached 500 at-bats in 1995. Joyner appreciated the Royals not trying to keep him from the mark, and realized the team was trying to keep payroll low in the post-Ewing Kauffman era. Joyner was willing to renegotiate to spread the money over extra years, defer some of it, or be open to a trade. With Bob Hamelin and Joe Vitiello needing a look as the Royals moved to a younger roster, the third option is what happened. On December 21, 1995, he was traded with minor-league pitcher Aaron Dorlarque to San Diego for Bip Roberts and minor-league pitcher Bryan Wolff.

Joyner has had an interesting post-playing career. While he was still playing, Joyner had appeared in the movie Little Big League as himself, and also appeared (once again as himself) in a made-for-TV picture called The Darwin Conspiracy. Apparently taking a liking to the film industry, he has acted in several movies aimed at Mormon audiences. He has also served as hitting coach for a few teams and had a stint working with an MLB development program in Italy and Brazil. And he has found time to be involved in various business ventures. Oh, and there was his admission of steroid use during the 1998 season. Joyner admitted the usage in a magazine interview in 2005, saying he asked Ken Caminiti for help obtaining the pills, tried three of them and then threw the rest away. That made Joyner perhaps the unlikeliest player to be named in the Mitchell Report.

In Royals history, Joyner still ranks seventh all-time in batting average, tied with Hal McRae at .293, and sixth in on-base percentage with .371, which is two points better than George Brett. The 1994-95 strike/lockout cost him some games, so he only compiled 7.7 bWAR in Kansas City in what amounts to 3 ½ seasons. He fares better by WARP over at Baseball Prospectus, which credits him with 11.3. Frankly, that feels closer to the truth. Joyner didn’t hit home runs, but he obviously got on base at a good clip, plus was always regarded as a good defensive player.

About the card
I’m not usually a big fan of horizontal cards, but I kind of like this one. I would recognize those lights and roof anytime. The back seems unremarkable, except I’d like to see a list of winners of the Owner’s Trophy. A quick Google search came up empty. I wonder if the Angels still award it.