Basking in the afterglow of their ALCS sweep of the Yankees, the Royals remained in New York as they waited to find out their World Series opponent. Many members of the team had celebrated the title at a disco, so it’s fair to wonder if they were in shape to travel or not.

In the meantime, I present to you this picture of Ewing Kauffman taunting Yankees owner George Steinbrenner after Game Three. It’s from a scan of The Sporting News, so it’s not great quality, but you get the idea: 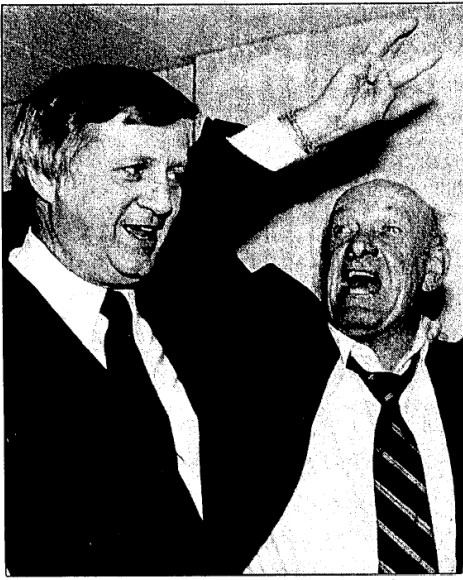 With the World Series slated to begin in the National League city, there was a chance the Royals might only have to make the short trip to Philadelphia.

In the NLCS, the Phillies blew a 3-2 lead in the bottom of the ninth, then scored two runs in the top of the 10th to keep their season alive with a 5-3 win over the Astros in Houston. The Philadelphia win tied the series at 2-2, with the deciding Game Five set for the next night at the Astrodome. Terry Puhl singled off Warren Brusstar in the ninth to tie the game for Houston, but Pete Rose singled with one out in the 10th, followed by two-out doubles from Greg Luzinski and Manny Trillo to account for the two runs.