Back in Kansas City a day before they wanted to be, the Royals got one nice consolation prize after losing the World Series. A crowd estimated at 100,000 turned out for a parade to honor the team, which ended at Liberty Memorial and also gave us this excellent picture of George Brett riding a horse: 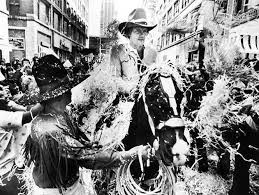 Perhaps finally vanquishing the New York Yankees and reaching the World Series was enough for Royals fans to celebrate. The players, obviously disappointed and tired after arriving back in Kansas City the night before, expressed gratitude for the reception. Willie Wilson, who had a tremendous season but set a World Series record for strikeouts, began to apologize to the crowd but was drowned out by a chorus of cheers from the fans. John Wathan told the crowd, “You’ve made this one of the best days of my life.” Pitcher Dennis Leonard said, “When we came back here, we felt like winners.”

While the Kansas City parade crowd was said to be larger than the estimated 80,000 who showed up for the victors in Philadelphia (celebrating the end of a 98-year drought), KC police reported no arrests.